In my lecture tours since last year, I have been requested to dissect the many interesting and complex issues concerning different kinds of cybercrimes for different audiences. I always make it a point to discuss the interconnections between the Cybercrime Prevention Act (R.A. 10175) with the Data Privacy Law (R.A. 10173), both of which were passed in 2012. Since the National Privacy Commission (NPC) was operationalized by the past President only last March 8, 2016, and the Implementing Rules and Regulations for R.A. 10173 are still in the process of being formulated, almost after four years since this law was passed, I have apprised the audiences of the various complications these circumstances have wrought, in the light of several security and data breaches that government agencies and private businesses have suffered, with the personal identifying information of over forty million Philippine registered voters being hacked from the Commission on Elections (COMELEC) database prior to the May 2016 elections, and published on wehaveyourdata.com, a U.S. website, as a most recent reminder that personal data can be lost via official “nincompoopery” and brazen non-accountability.

To get the full understanding of how the Supreme Court grasped the issues concerning spam, the relevant three paragraphs of its decision are quoted here:

The Government, represented by the Solicitor General, points out that unsolicited commercial communications or spams are a nuisance that wastes the storage and network capacities of internet service providers, reduces the efficiency of commerce and technology, and interferes with the owner’s peaceful enjoyment of his property. Transmitting spams amounts to trespass to one’s privacy since the person sending out spams enters the recipient’s domain without prior permission. The OSG contends that commercial speech enjoys less protection in law.
But, firstly, the government presents no basis for holding that unsolicited electronic ads reduce the “efficiency of computers.”

Secondly, people, before the arrival of the age of computers, have already been receiving such unsolicited ads by mail. These have never been outlawed as nuisance since people might have interest in such ads. What matters is that the recipient has the option of not opening or reading these mail ads. That is true with spams. Their recipients always have the option to delete or not to read them.

To prohibit the transmission of unsolicited ads would deny a person the right to read his emails, even unsolicited commercial ads addressed to him. Commercial speech is a separate category of speech which is not accorded the same level of protection as that given to other constitutionally guaranteed forms of expression but is nonetheless entitled to protection. The State cannot rob him of this right without violating the constitutionally guaranteed freedom of expression. Unsolicited advertisements are legitimate forms of expression (italics supplied, citations omitted).

This ruling as of now had not been overturned. According to the Philippine Civil Code, the decisions of the Supreme Court form part of the law of the land. Even if this decision is riddled with technical and legal errors, it is the law as far as spamming is concerned. 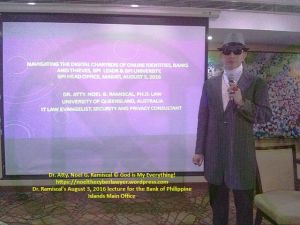 Dr.Atty.Noel G. Ramiscal at his lecture for the BPI LEADr and BPI University, August 3, 2016

An interesting development that I discovered in my research on, and advocacies against cybercrime, since 2015 was the Bangko Sentral ng Pilipinas (BSP) Circular issued by the BSP Deputy Governor, Nestor Espenilla Jr., last March 25, 2015, which was Memorandum Circular No. -M2015-017. It had the title “Prohibition against push messages or commonly known as unsolicited text messages”.
Banks and their subsidiaries were reminded by this BSP Circular of Sec. 4 of R.A. 10175 or the Cybercrime Prevention Act concerning the criminalization of spamming or sending unsolicited commercial messages as well as several National Telecommunications Commission’s (NTC) pronouncements including Memorandum Circular No. 03-03-2005 A, dated July 3, 2006, as amended by NTC MC No. 04-07-2009 dated July 7, 2009 on this subject. The BSP Circular even stated that the NTC circulars “protects and promotes the interest of the subscribers/end-users of public telecommunications entities (PTEs) by prohibiting content and/or information providers (CP) from sending and/or initiating push messages. A subscriber who wants to avail the services of the CPs and/or PTEs may send his written consent through correspondence, text message, internet or other similar means of communication to the PTE.”

Finally, the Circular stated that the Banks “shall remain responsible for all the violations of the aforementioned regulations and law committed by their outsourced agency/personnel”.
I apprised the lawyers and employees of the Bank of Philippine Islands in my August 3, 2016 lecture for them sponsored by the BPI LEADr and the BPI University, as well as the lawyers and foreign service officers of the Department of Foreign Affairs, last August 12, 2016 and the lawyers who attended my lecture for the UP IAJ last August 15, 2016, of this matter.

1.VOID for being UNCONSTITUTIONAL:

a. Section 4(c)(3) of Republic Act 10175 that penalizes posting of unsolicited commercial communications. 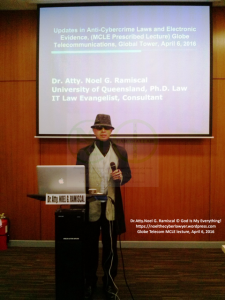 The BSP apparently is not alone in thinking that spamming is still illegal. In my lecture for the lawyers of the Globe Telecommunications last April 6, 2016 at their Tower in Bonifacio Global City, I apprised the lawyers that Globe Telecom’s privacy policy and fair use policy which prohibit spamming do not comport with the Supreme Court’s ruling. One of the lawyers cited the NTC Circulars which prohibit spamming. But these are not in point because they were issued way back in 2006 and 2009. Smart’s Corporate Website Terms and Conditions states: You further understand and agree that sending unsolicited e-mail advertisements to the Web site or any user of the Web site or through voice computer systems is expressly prohibited by these Terms and Conditions. Any such unauthorized use of our computer systems is a violation of these Terms and Conditions and applicable “anti-spam” laws.

Adding to the confusion is the monumental oversight by the NTC in not coming up with a clear guideline [after February 11, 2014 and up to now] that will construe and implement the Supreme Court decision for the telecommunication companies.

This is a very important issue that affects not merely the telecommunication companies, but all Philippine net denizens, whose personal identifying information could have been compromised due to some vicious spamming attacks. More on Part 2 of this series.

One response to “Lawbytes 113 : Dr. Ramiscal’s CyberLaw on Spamming: Why the Bangko Sentral ng Pilipinas and Telcos are violating the Spamming Law in the Philippines [Part 1] Copyright by Dr. Atty. Noel G. Ramiscal”